I’ve been working hard not to be a food snob this holiday season!  There might be many different definitions of a food snob, but to me, it’s someone who has to call out and openly discuss what others are eating or make a big deal about what one is not eating themselves.

I attended a neighborhood Girls’ Night Out party and there were many great treats there.  I stay pretty disciplined to my plan, but on this night I was challenged to stay the course.  I had used my own tricks: arrive full, keep a drink (a lovely water!) in hand, and survey the scene to see what I could eat without having to chalk this one up as a “cheat night” instead.

As the hostess offered me several glasses of wine and I opted for water, I could tell I was possibly treading in choppy waters.  This was a party with a lot of people I had not met before and I did not want to be “that girl” who only ate the healthy stuff (might be too late!).  That’s so unlike me to be so worried about this, though.

So I loaded up on the broccoli and carrots, but I then chose to slip a few crunchy snacks on my plate as well.  I was frustrated I went off plan a bit, but in this case, I was more concerned about my “look what she’s not eating” image as well.  I didn’t want to be that food snob that spoke down to the foods offered at the party or that girl that lectured on about why someone shouldn’t be choosing what’s on their fork and entering their mouth at that very instant.  Keep up like that and watch people clear the path as you come near!

I’ve learned to be quiet about what I am and am not eating.  If someone inquires and wants more info….watch out, I’ll talk your ear off!! But unless the topic comes up, I’m just a girl working my plan and doing my own thing.  No one wants to hear why you subbed out fries for the no-butter green beans or that your tea does not have any sugar in it.  Just order or load your plate, eat it and mum’s the word!

In due time, those that spend ongoing outings around you will take notice of your patterns.  As I’ve said before, some will be inspired and will want to know more.  Some will never notice, or some will be frustrated by your discipline and ongoing dedication to great food choices, and really, that’s their issue to tackle, not yours!  Overall, it’s your plan and your body and you have a reason for what you do.  Be empowered to keep doing what you’re doing, even if you’re the only one in the room with the most boring plate.  No matter what, celebrate you and the differences you bring to the party! 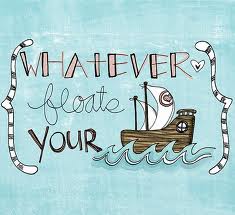 So as the holiday season swings into full gear with book clubs, kids’ parties, dinner outings, office lunches and celebrations, continue to keep the silence, work your plan, and remember the old saying, “To each his own”, right?!